The highest purpose of the National Independence Party of Azerbaijan (NIPA) as the first political party in Azerbaijan is to succeed in the establishment of independent, united, democratic and mighty state of Azerbaijan and thereby to return glorious place of our Nation in history.

Guided by national interests above all, the National Independence Party of Azerbaijan is a political party struggling:

• For the sake of establishment of national governmental system being free from contradictory influence upon national interest of political powers inherent to any foreign state or a union of states formed only by free will of the people on the background of the national self-governance;

• For the sake of turning of the thought of nationalism into the ground of national ideology being assumed by the nation’s all individuals and achievement of expression of national will by any individual focused on the national consciousness;

• On the sake of nationwide moral values realized as typical reflection of public ideas in all fields of political life; protect our national morality and traditions from harmful impacts; choose the way of moral and cultural enrichment;

• On the sake of building a free economy worthy to a free person on the basis of tie of common economic independence of the nation with private economic liberty of its each member as a indestructible unity and reach a vast economic progress;

• Accepting eminence and inimitability of any individual of the nation; makes human rights immunity the basis of national policy; establishing a civil society guaranteeing the protection of freedoms of a person;

• Systematic hitting the mark of views, movements and thoughts; termination of the society’s changes in correspondence with the nation’s interest.

National Independence Party of Azerbaijan is a political party which struggles for government and accepting coming to the government not only in physical sense, but also as governance of our thoughts and ideas.

For NIPA government is not only a purpose, but a source to rescue Nation and State from only and only from hard social and political; social and economic and moral crisis; identify our country as a mighty and democratic state amidst the world states; raise financial and moral welfare of our nation and any Azerbaijani citizen respectively.

The principles accepted by National Independence Party of Azerbaijan as an ideological basis in their activity are as follows:

Independence. Our nation possesses the right of independence and freedom favored by God and the nature; and we hope our nation will be recognized and considered by the world’s all peoples as a nation gained its independence through the struggle. A nation cannot defend and advance its existence and civilization without possession of independence. We perceive the goal of National Independence as an ideological foundation of movement for pure, just and magnificent future of national ideology.

Nationalism. Any nation possesses the right to prefer its interest over others on condition not violating freedoms, rights of other nations and benefit from existence and prosperity of the state. We estimating highly the interest of Turk nation accept the realization of the interest as faith. One of the most important dispositions of our society, possessed common language, culture, history, religion, tradition, folk-lore and written literature is national consciousness. We identify Turkism with Nationalism as a basis of national consciousness in Azerbaijan. We accept mightiness of Turk nation as a basis principle courageously inspired by our deep affection and love towards our nation and consider urgent any activity in this line.

National statehood. Admitting that nation is not for state, but state is for nation we consider the state an urgent institute for preservation of Azerbaijan’s indivisibility, realization of national interest and guarantor of freedom, liberty and equality. Referred to national statehood traditions of Azerbaijan, an independent Azerbaijani state must provide political, economic and moral development of not only separate classes, groups and layers, but also whole Azerbaijani citizens.

It is possible to gain success in the way of national prosperity in that case when the state creates considerable circumstance for political, economic and cultural development for its citizens and any citizen tries directly at the same time for fortification and development of the statehood.

Liberalism. The liberty of a person in normal case of the nation and the state must not be restricted by anything on condition not violating the freedom of other people. Taking as a target to establish the freedom of the nation entirely with the freedom of its each individual as unbreakable unity, considering any person inimitable and inviolable we think guarantee of all human rights and freedoms reflected in international documents one of primary conditions of establishment of modern democratic state.

Leadingness. For our nation’s assuming the worthy place amongst the world nations in history stage benefited by advanced scientific knowledge created for mankind, economic and legal mechanisms, moral values creatively; acceleration and expanse of our national culture, political and economic creation; distance of any Azerbaijani citizen from ignorance and black-Hundreder and his possession the most advanced world outlook and thought are very significant. Making steps on this way we hope Azerbaijan will go into the rows of the most leading countries near times.

National Independence Party of Azerbaijan being a party of people, rejecting class, group and social discrimination and hitting the target the thought, sense and idea community to provide unity of national and homeland, independent, nationalist, liberalist and leading patriots from all layers of the people comprise its social base. 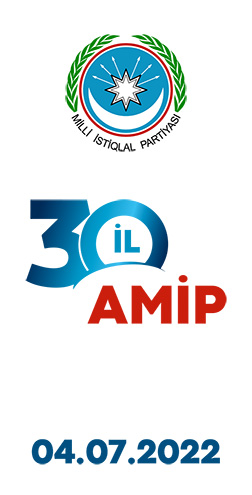 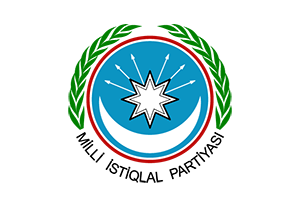